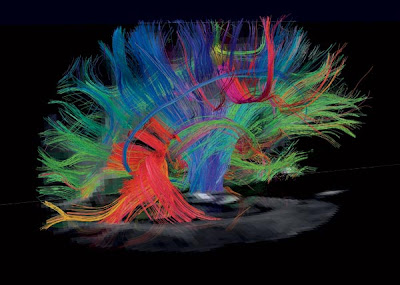 A wide variety of chemical messengers, called neurotransmitters, modulate the brain’s tendencies toward arousal or calming.

Adrenaline (or epinephrine) is an excitatory chemical that helps the body respond to danger by dilating the eyes, speeding up the heart and initiating other functions that prepare the body for fight or flight.

If an acute response is not necessary, the body can convert adrenaline to dopamine, another excitatory molecule that improves focus and concentration.

Both dopamine and epinephrine are important under the appropriate circumstances. However, if adrenaline is dominant in a preschooler during circle time, he will be unable to settle down. Similarly, if excessive dopamine is present, the result is obsessive, rather than focusing, behavior.

At bedtime, when the body tries to cycle into sleep, the brain may have trouble breaking down the high levels of excitatory neurotransmitters. Thus, children who take Ritalin and related stimulants can have trouble sleeping or can develop obsessive behaviors such as tics.

Understanding the chemistry of excitement versus sedation is important if your child is overactive. In children who exhibit overactivity, regulation between the two states is impaired. Often, the problem is an excessive amount of substances being consumed that increase excitatory messengers. The six most common dietary excitement inducers are:

1. Aspartame (NutraSweet) because it is made from two amino acids that are the building blocks for stimulating neurotransmitters.

2. MSG (monosodium glutamate) which directly agitates, because several types of glutamate receptors, all of which arouse, are in the brain. (For a detailed explanation of how MSG and NutraSweet affect the nervous system, see Excitotoxins: The Taste that Kills, by Russell Blaylock, M.D.)

3. Artificial colors that can strain liver detoxification systems, leaving half broken-down substances in the blood that cause irritation in susceptible individuals.

4. Unidentified allergens, presumably due to their ability to cause inflammation and other chemical reactions. The nervous system and immune system exchange information. When the immune system is under siege, it can send instructions to the nervous system to rev up or shut down. (To understand the relationship between hidden allergic reactions and behavior, see Doris Rapp’s Is This Your Child?)

6. Caffeine, as it is used precisely for the purpose of inducing excitement!

Avoiding the known stimulants is the first step in calming.  But because the brain depends on a separate set of substances for calling, an over-excited state may indicate a shortage of important nutrients.  Thus, the second step is adding substances that encourage serenity.  The three most important supplements are:

1. Magnesium, which enhances muscle relaxation and inhibits the release of the excitatory neurotransmitter, acetylcholine.  Many youngsters are deficient in magnesium, due to picky diets and its decreasing levels in the soil.  When magnesium is very deficient, muscle twitching can occur.

Therapeutic doses for children over the age of two range from 100 to 300 mg.  Toxicity is almost impossible, because, if more magnesium is taken than the body can absorb, the body excretes it as diarrhea.

2. Essential fats, the basis of brain structure.  Research indicates that deficiency in essential fatty acid may cause hyperactivity.

Flaxseed oil contains a 1:1 ratio of omega 3 and 6, the two major families of important fats.  For children who cannot swallow pills, the addition of organic flax oil, Udo’s Choice, or Total EFA brands of essential fats can be useful.  Supplemental essential fats should be added to foods before serving (not cooked into them) and taste-tested weekly.  A sour or bitter after-taste signals rancidity and means the oil should be discarded.

3. GABA (short for gamma-amino butyric acid), the most plentiful calming messenger.  Calming neurotransmitters are so important that in the brain there is 200 -1,000 times the amount of GABA as the dopamine it controls!  GABA also decreases muscle tension, but in large doses, can cause drowsiness.

Generally, 300 to 600 mg are used; 1,000 mg can be used for children over 13.  Vitamin B-6 is necessary to utilize GABA and magnesium, which is the reason that it reportedly can help in hyperactivity.

To calm your child’s brain, search for balance before reaching for drugs.  Remove excitatory chemicals from the diet, and use supplements proven to quiet the most hyperactive.