What Is Vitamin D and How Do We Get It?

Vitamin D is a fat-soluble vitamin that is produced naturally as D3 or cholecalciferol (pronounced koh·luh·kal·sif·uh·rawl) when sunlight hits the cholesterol in the skin. Most people used to get sufficient vitamin D3 from sunlight.

Today, vitamin D deficiency is rampant largely in part to increased use of sunscreen to prevent skin cancer, coupled with a move away from an agrarian society and an increased move indoors.

Many processed foods and dairy items are fortified with synthetic vitamin D2, which is less easily absorbed.

The body makes what it needs, accumulating and storing significant reserves in the tissues, liver, spleen, bones, and brain; it can be then be available during darker months.

What Is the Role of Vitamin D?

Vitamin D acts more like a neuro-steroid hormone than a vitamin, directly affecting brain development and regulation of behavior. It is crucial in the functioning of the immune system. Recent research suggests that vitamin D offers neuro-protection, anti-epileptic effects, immuno-modulation of several brain neurotransmitter systems and hormones. It is important in chronic health conditions because it enhances the body’s ability to fight inflammation and destroy dangerous microbes.

How Much Vitamin D Is Necessary?

In 2014, the American Academy of Pediatrics stated that infants under 12 months require 400 International Units (IU) per day and older children and adolescents require 600 IU per day. The Vitamin D Council says that “children require 1,000 IU/25 lbs body weight when they are unable to receive adequate sun exposure in order to reach optimal levels.”

The ideal amount of vitamin D depends upon various factors; those with chronic and autoimmune conditions could require higher levels. While the typical lab test for vitamin D says that 30 ng/dL is a “normal” level, “normal” is not the same as “optimal”. Remember that U.S. RDA (Recommended Daily Allowance) levels are devised to prevent diseases of deficiency, which is not the same thing as promoting optimal health. In fact, Sherry Rogers MD stated in the September 2016 edition of her “Total Wellness” newsletter that vitamin D levels of 80-100 ng/dL are needed for optimal health.

Maybe the high autism incidence among Somalis living in Minnesota is due to the possibility that their bodies are programmed to the extremely high levels from the strong sun in their native land and lacking in their new home.

Evidence supports a vitamin D deficiency theory of autism (see References, below). Vitamin D during gestation and early infancy is essential for normal brain functioning. In 2017, researchers concluded that vitamin D deficiencies in pregnant women should be considered a risk factor for neurodevelopmental disorders such as autism.

The importance of prenatal, neonatal, and postnatal vitamin D supplementation cannot be underestimated.

Calcitriol, a form of D3, is different from all the body’s other steroid hormone systems. While other steroids are produced directly from the body’s natural store of cholesterol “precursor” compounds, the amount of calcitriol is completely dependent on having enough precursor 25-hydroxyvitamin D present in the first place.

Brain levels of activated vitamin D directly depend on the amount of vitamin D a pregnant mother makes in her skin or puts into her mouth, to act as a “molecular switch” in brain tissue, turning on genes that influence her baby’s brain development. About 1,000 genes are already known to be targets of calcitriol activity, and that number is growing fast.

In the case of the human fetus, brain calcitriol levels are directly linked to very early cognitive development, with tremendous implications for the developing baby’s brain.

Vitamin D and the Flu

Many healthcare practitioners are suggesting high doses of vitamin D along with probiotics to combat viral infections like the flu. They argue that if one examines the demographics of children who die from the flu, almost two-thirds had epilepsy, cerebral palsy, or other neurodevelopmental conditions associated with vitamin D deficiency. Exacerbating the problem further: many of these kids take anti-convulsant drugs, known to leach vitamin D.

Anyone with recurrent or chronic illness should obtain a baseline measurement. Make sure your whole family has blood levels of vitamin D of 80-100 ng/dL. The most common way to have your vitamin D level tested is to see a doctor, but an at-home test is available through the Vitamin D Council. The test measures 25-hydroxyvitamin D or 25 (OH) D, an inactive form of vitamin D. Stick a finger or heel to get a few drops of blood and mail the kit back. The results will be mailed to you without involving a physician.

Prevention Is the Best Medicine

To prevent vitamin D deficiency, walk with face, hands and arms exposed to the sun, three or more times a week, for between 10 and 20 minutes, depending on skin tone, the season, and the distance from the equator. Feed your family cod liver oil and eat animal fats because the fat-soluble vitamins A, D, E and K are stored in fat.

This insidious deficiency is tragically missed in many disease diagnoses. Thankfully, it is the single most cost-effective treatment. Check levels often, replenish and maintain! 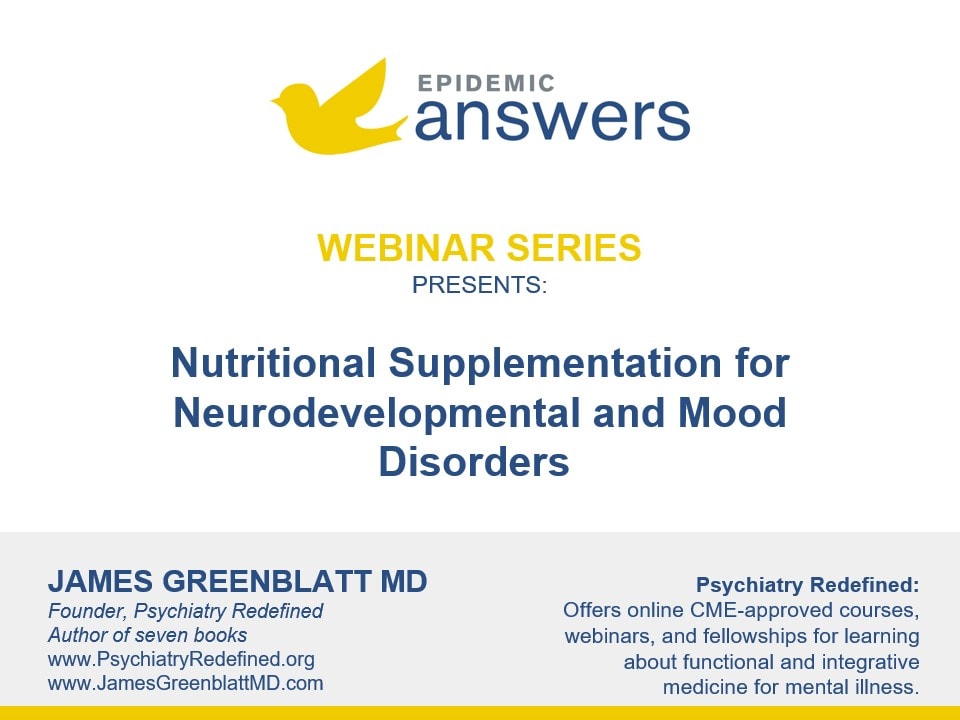 Categories: ADHD | Allergies | Asthma | Autism | Autoimmune Disorders | Cancer | Causes | Developmental Delays | Diabetes | Gastrointestinal Disorders | Lyme Disease | Mood Disorders | Nutrition | PANS PANDAS | Seizures | Sensory Processing Disorder | Solutions
We use cookies on our website to give you the most relevant experience by remembering your preferences and repeat visits. By clicking “Accept”, you consent to the use of ALL the cookies.
Cookie settingsACCEPT
Manage consent