What Is Low-Dose Naltrexone? While naltrexone is a decades-old pharmaceutical that is used to manage alcohol and opiate addiction at doses of 50-100mg, low-dose naltrexone (LDN) is commonly given at dosages of 0.5-6.0 mg. At this lower dosage, LDN is typically prescribed off-label to manage neurological symptoms of disorders such as Lyme disease, multiple sclerosis, fibromyalgia, autism and other neuroimmune chronic conditions. LDN has very little side effects and no known toxicity.

LDN has been found to block microglial cells, which are immune-system cells in the brain that cause inflammation. These cells are the ones responsible for the manifestation of many symptoms of neurological disorders.

LDN shuts down the production of inflammatory cytokines within the body, thereby helping to switch off autoimmune reactions. In addition, research has shown that it can also lessen the amount of breakdown of the myelin sheath that protects the electrical circuitry of the brain and spinal cord. This breakdown, called demyelination, is a common feature of neuroimmune disorders and is brought on by excessive inflammation within the nervous system.

Inflammation can not only cause demyelination, but it can also cause common symptoms of chronic health disorders such as pain, swelling, stiffness, cognition problems, memory problems, neuropathy, fatigue, behavioral issues, allergies and gastrointestinal issues. LDN has been shown to reduce the severity of such neurological symptoms.

Other Ways to Lower Inflammation

There are many ways to lower inflammation that have nothing to do with the consumption of pharmaceuticals. We advocate taking a holistic, integrative approach. The first step is to look at the diet and make potential changes. Hidden food sensitivities and intolerances are common causes of inflammation, so consider doing an elimination diet to see if common foods are behind chronic symptoms.

Reducing or eliminating the consumption of high-glycemic foods is another way to reduce inflammation. High-glycemic foods raise blood sugar, and sugar is inflammatory. Other common high-glycemic foods are those made from processed grains, known as “white foods”, such as pasta, bread, crackers and cake. Some practitioners recognize that more and more individuals are becoming insulin-resistant and may thus recommend the elimination of all grains because they ultimately break down into sugar.

“Eating the rainbow” of naturally colored fruits and vegetables is an excellent start to adding in antioxidants that lower inflammation. People with chronic health conditions often need to supplement to get enough antioxidants to lessen the high amounts of inflammation that are a common root cause of their disorders. Your practitioner may consider giving nutritional supplements such as:

Lowering any of the stressors of the total load of stressors can reduce inflammation. These stressors can be physical, structural, environmental, emotional, biological or behavioral. In addition, please review our page on How to Reduce Inflammation for other ideas.

LDN not only lowers inflammation, but it also increases a positive immune response by restoring the balance between Th1 and Th2 cells of the immune system. Research has shown that it exerts its immunoregulatory activity by binding to opioid receptors in or on immune cells and tumor cells.

Other Ways to Boost the Immune System

Look for gut dysbiosis by having a stool test, small intestine bacterial overgrowth (SIBO) and/or organic acid test (OAT) performed. Check for nutritional deficiencies, especially for those that affect the way the immune system works such as vitamin D.

Good, P. Low-dose naltrexone for multiple sclerosis and autism: does its benefit reveal a common cause? Med Hypotheses. 2006;67(3):671-2.

Patten, D.K., et al. The Safety and Efficacy of Low-Dose Naltrexone in the Management of Chronic Pain and Inflammation in Multiple Sclerosis, Fibromyalgia, Crohn’s Disease, and Other Chronic Pain Disorders. Pharmacotherapy. 2018 Mar;38(3):382-389. 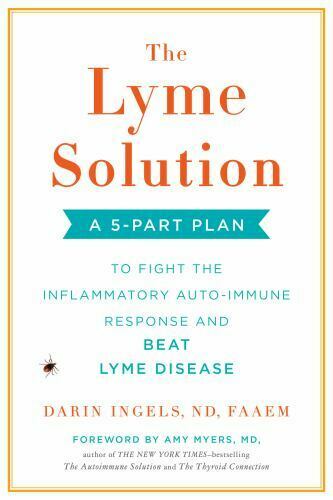 The Lyme Solution: A 5-Part Plan