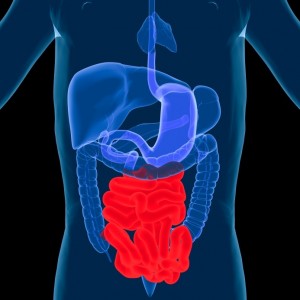 Secretin is a hormone that induces the pancreas to release bicarbonate, thereby adjusting the pH of the small intestine so that digestive enzymes can function.

As one of 20 known gut neuropeptides, secretin has the ability to interact with both the digestive tract and the brain.  In other words, through these messenger molecules one’s capacity for digestion can affect cognitive function.

The stomach and intestines are thus a small non-thinking brain whose activities directly impact their thinking counterpart in the head.  When secretin is not properly regulating pancreatic function, its receptor sites in the language areas of brain may not be activated either.

Now, years later, the accidental discovery of the importance of secretin may prove in retrospect how damaging antibiotics and some medications can be.

These can injure the outermost layer of the intestine where secretin and other significant substances (like serotonin) are made.  Administering secretin is dramatically helping some youngsters by restoring some of the function of the ravaged gut lining.

Presently, secretin is given intravenously while the patient is sedated, as part of a study of the digestive tract.  A handful of doctors have agreed to administer secretin without running medical tests, but because this is an unproved use of the hormone according to the Food and Drug Administration, these physicians are reticent to come forward.  The dose of secretin generally used is the same as if the test were being done (one C u per kg of body weight).

If a child responds positively to the infusion, the results good should be obvious within five weeks.  (It will be obvious — not necessarily miraculous — or it is not a positive response.)  The two most often reported consequences are formed stools and significant increase in language.

After four to five weeks the stools usually return to their pre-secretin consistency, but the gains in speech remain (though the speed of word acquisition may also return to pre-secretin levels).  Positive reactors are given a second injection, to double check the usefulness of the treatment and to provide more direct delivery of the secretin.

After the second shot, the treatment is totally experimen­tal, with some parents trying drops under the tongue and others using skin delivery.  Nobody knows if this will be safe or effective long-term, as it has not been used this way for longer than one year.  The potential to produce antibodies to secretin may or may not be a reason to stop treatment.

Some parents are checking for these periodically.  In addition, there appears to be a boost of serotonin activity for approximately 72 hours after the injection.  A child with too much serotonin activity may become severely agitated for this period of time.  If a child has responded badly to drugs in the Prozac family, beware.

Anecdotal evidence implies that secretin is not consistently helpful unless a child has significant bowel issues and/or is doing better on a gluten and casein free diet.  Significant bowel symptoms include chronic gooey or unformed stools, extensive food allergies, recurring yeast problems, or any other problem that may have motivated a visit to a gastrointestinal specialist.

At its best, secretin quickly solves long-term gastrointestinal issues, but, for most parents, most useful in buying time while they are using diet and nutrient support to correct digestive dysfunction.  In addition, digestive enzymes or other treatments that may not have worked before may be effective after digestive re-regulation with secretin.  Secretin’s activation of the brain, once rolling, may continue to advance with proper nutritional support.

Some observers are suggesting that secretin may be to autism what insulin is to diabetes, but this assumes the gut lining cannot be regenerated.  The lining of the gut has a tremendous capacity for healing and turns itself over approximately every 72 hours.  While there is little doubt that some medications and antibiotics have the capacity to permanently scar it, why start with that assumption?

Excellent nutrition is required to keep the lining in repair, and few of these youngsters have had the benefit of the needed long months of sufficient nutrients, either because they refuse to eat healthy foods or because they absorb them because the digestive tract is crippled.

Categories: Autism | Nutrition | Solutions
We use cookies on our website to give you the most relevant experience by remembering your preferences and repeat visits. By clicking “Accept”, you consent to the use of ALL the cookies.
Cookie settingsACCEPT
Manage consent